Echo & The Bunnymen: Rock Around The Clock 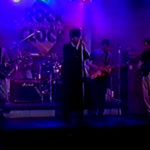 When Echo & The Bunnymen appeared on 1986’s Old Grey Whistle Test – Rock Around The Clock marathon, they had just come through turbulent times. The year before, drummer Pete De Freitas had left the band and disappeared to America on a journey of self discovery, only to return to the fold shortly before broadcast. What they produced on this night was a triumphant return, and for me, their last moment of greatness.

The band’s current incarnation released their latest album The Fountain just recently, and I had planned to write a little review for it. However when I rediscovered a video of them on You Tube from this show (which you can see at the end of this article), I really wanted to write about this instead. I had been a fan for a few years at this point, and they’d been very quiet on the release front since 1984’s Ocean Rain, having put out only one new single, and a compilation called Songs To Learn And Sing in 1985. Pete’s departure from the band had been well documented in the music press, so when he turned up for this it was very exciting news. They had been recording the forthcoming album with David Plamer (of ABC), as the rest of the Bunnymen had no idea if Pete would ever return (he was apparently taking lots of drugs and would go ‘off radar’ for days on end), but he was always seen as vital to the core of the band’s dynamics.

On the night, they appeared early on in the show (as I recall), giving a unique performance of The Velvet Underground’s Run, Run, Run being joined onstage by Billy Bragg (link below). Then later on in the show, they returned to showcase two new tracks (The Game and Lips Like Sugar), that were to eventually appear on their next album, the self-titled Echo & The Bunnymen in 1987. The performances they gave that night were electrifying, and have a rawness in the guitars that had been a trademark of the band’s earlier career. They were back, and it was great to see, and boded really well for the next album.

They went on to re-record most of the recordings for the album with De Freitas (replacing what David Palmer had recorded), however when it was finally released, the whole affair seemed very over-produced, and had to me, lost the vibrancy of that night. I always remembered this performance with fondness, and thoughts of what might have been. I recorded both their appearances that night, but years later when I went to archive my off-air vhs recordings, could only find the earlier one with Billy Bragg, so I was overjoyed to rediscover it on You Tube. It’s embedded below, but please take note that it seems to have been encoded at a very high volume level (with some minor distortion), so take care you don’t have your volume levels up too high.

Echo & The Bunnymen have of course released many albums since then, I’ve liked most of them to a degree, but they stopped being a truly great band on that night in 1986. As for the new album, The Fountain, it does sound like their best for a while, and well worth a listen.

This entry was posted on Thursday, December 3rd, 2009 at 5:34 pm and is filed under Music, Reviews. You can follow any responses to this entry through the RSS 2.0 feed. You can leave a response, or trackback from your own site.

One Response to “Echo & The Bunnymen: Rock Around The Clock”