Leyton Orient Win Promotion Back To The English Football League 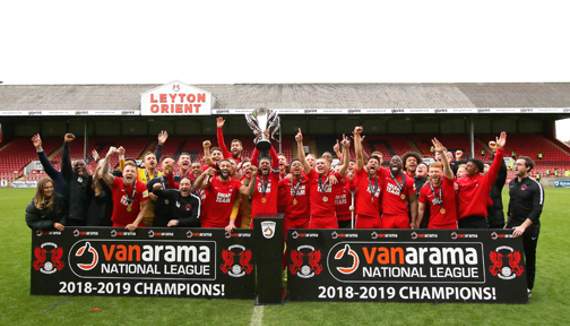 On April 27th 2019, Leyton Orient Football Club secured promotion back to the top tiers of the English Football League as they were crowned champions of the Vanarama National League. A goalless draw against already relegated Braintree Town, shown live on BT Sport, was enough to see them top the table as nearest rivals Salford City lost 3-1 away.

It was a huge achievement for the club, who just over two years ago finally lost their top tier league status after 112 years and almost went out of business entirely due to mis-management by then owner Francesco Becchetti and non-payment of taxes to HMRC. Thankfully the club managed to find new owners and was officially sold to Nigel Travis, chairman of the Dunkin’ brands on June 22nd 2017.

I’ll never forget that dark day at Brisbane Road at the end of the 2016/17 season on our last home game, when a protest erupted and hundreds of disgruntled O’s fans stormed the pitch a few minutes from the scheduled end of the match. Officials eventually called the teams off of the pitch saying the game was abandoned. However a short time after everyone had been finally removed from the ground, both teams were brought back to play out the final moments of Leyton Orient’s 112 year unbroken run in the Football League in front of an empty house. It really seemed like this could be the end for the club. We would never come back from this. However as the summer and close season progressed, my optimism slowly returned. I’d supported them for 35 years, this wasn’t going to stop me and ultimately this is what being a fan is truly about.

Their first season in the Vanarama League started badly and they might have been headed for a further relegation, but that changed quickly with the appointment of a new manager Justin Edinburgh in November of 2017. The club’s fortunes on the field quickly improved and they finished that first season in a safe and consolidated mid-table position. This year however they impressed from the start of the season, and have been near or at the top of the league table for most of it. A much tougher run-in of final games, on paper at least, saw them navigate through to go into the final day of the season in top spot three points clear of Salford City and with a much better goal difference than their rivals. The rest, as they say, is now history.

For me as a fan of nearly 37 years, this season has been one of the most satisfying, regardless of the level of football we found ourselves playing at. It’s difficult not to be superstitious as an Orient fan, but in private I’ve been confident we’d win this league since before Christmas, even if I was cautious to say it out loud. This team seemed a little different from past ones I’ve followed as they never seemed to give a game up. They came back from behind in games so many times to rescue a draw or secure a win, when in the past we often bowed our heads and ended up on the losing side. The team spirit just seemed very strong in this current crop of players.

Over a long season of 46 league games, it’s sometimes hard, or unfair, to pick out single moments or games as turning points, or the most vital. It’s the overall points tally that counts, but I’m going to pick out my favourite moment anyway from the many that I take away from this season, one that at the time I secretly thought was so very important. It was the home game against Eastleigh on April 9th 2019. The O’s had started badly and conceded an early headed goal which they should have done better against. Then after pulling a goal back, they conceded a second headed goal (from the same striker) just before halftime and went in to the break trailing 2-1.

That special moment came not long into the second half. An Eastleigh attack came to nothing as O’s keeper Dean Brill caught the ball safely. Brill reacted instantly and rolled the ball out quickly to Craig Clay who started off an attacking move that ended with Macauley Bonne scoring a much needed equaliser. A few minutes later, substitute Matt Harold added a third for the O’s to take the three points and the win. I’ll never forget that quick thinking and quick action from Dean Brill that really turned that game.

Below are the video highlights from that game, you can see that quick thinking from Dean Brill at the 3:10 mark.

So what now for Leyton Orient? Firstly I’d like to thank every single player, staff and board member for achieving the seemingly impossible. They have given us fans our club back, and our pride. Next stop is an additional bonus, we have a cup final to look forward to at Wembley on May 19th, against AFC Fylde. Ultimately nothing really rides on this game, we’ve achieved promotion now. We can now enjoy a great day out with so much pressure removed from everyone. Doing the double? Why not. And then, preparations have to start to keep as much of this current squad and team behind them together, so that we can build on our success and go from strength to strength. Maybe consecutive promotions? Who knows. Right now, I wouldn’t bet against them.

This entry was posted on Monday, May 6th, 2019 at 1:00 pm and is filed under News, Sport. You can follow any responses to this entry through the RSS 2.0 feed. You can leave a response, or trackback from your own site.